There really is something about gardeners that non gardeners envy but also find inspiring. Perhaps they too could have such beauty surround them and share in some of the deep satisfaction that comes after working in a garden and watching plants grow and bloom. While usually a solitary or couples activity, when gardeners get together to share knowledge, successes and challenges, it is their enthusiasm and passion for gardening that shines through. On Norfolk Island this is most clearly seen around the trading table at monthly Norfolk Island Garden Club meetings. 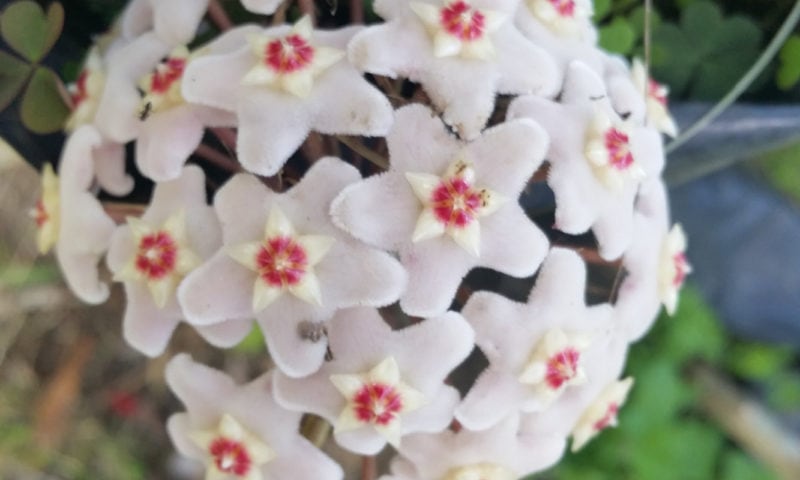 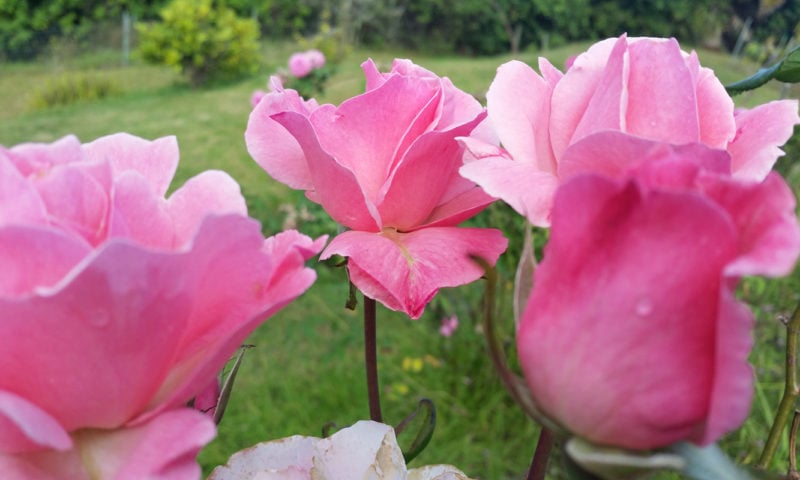 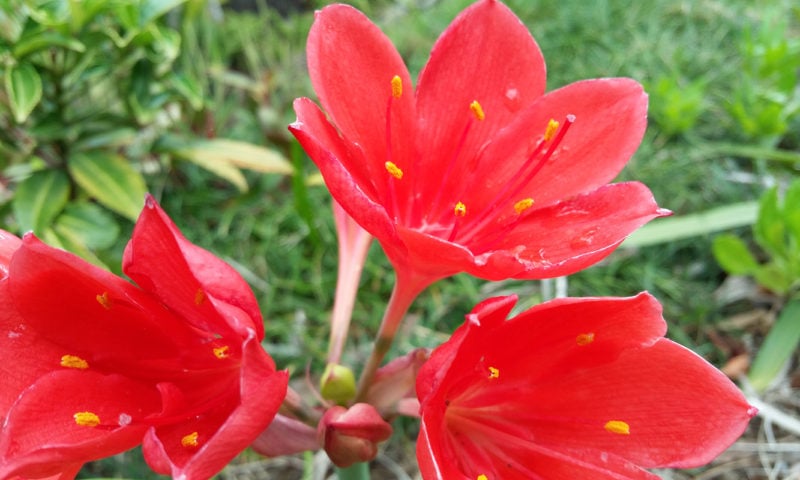 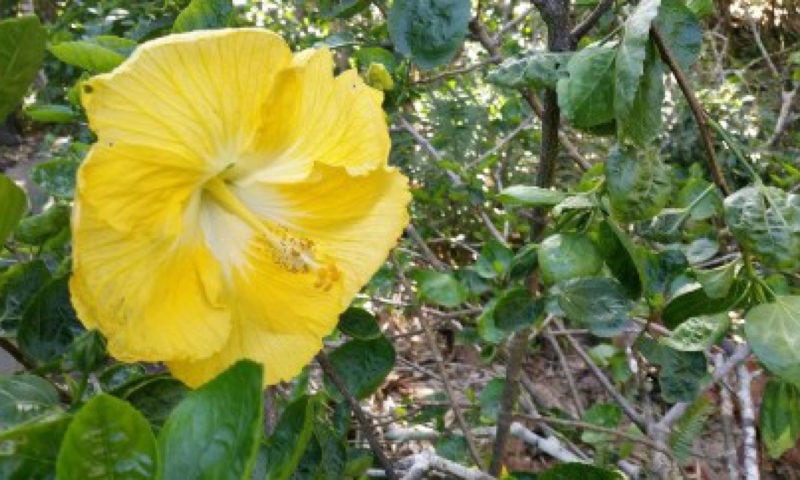 President Jan Keeping says she “loves the trading table where we bring cuttings, plants, spare fruit, guava jelly etc., ask plenty of questions and trade among ourselves”. A member of the Club for all but 2 months of its 29 years, Jan says she enjoyed it from the start. These days she finds herself in a similar position as the more experienced Island gardeners of that time such as Doris Wood and Norma Summerscales, answering questions from younger members and new comers unfamiliar with local conditions. Gardening in our isolated location, completely surrounded by the ocean can present some unique challenges.

Top of the conditions that Jan deals with on her beautiful cliff-edge property on the eastern side of the Island, are wind and salt. To buffer the wind she and her husband have grown a hedge of incredibly salt-tolerant pohutukawa, creating a series of protected micro-climates where plants such as vincas, allamanda, roses, geraniums, pansies and daisies can thrive. Mature native White Oaks and pine trees planted towards the cliff edge also provide a frame to the stunning ocean views. On the protected side of the garden behind the house, there are numerous garden flower beds and an orchard with banana, orange, lemon, plum, peach, nectarine, avocado and china pear trees.

Gardening on an Island created as a result of a volcanic eruption, means dealing with porous volcanic soil that requires mulch, mulch and more mulch! The fallen leaves from the White Oaks provide Jan with an essential compost ingredient, topped up with garden cuttings and at times some dynamic lifter and blood and bone. Aside from times of extended dry, Jan says the pleasure of gardening in Norfolk’s sub-tropical climate is not having to deal with extremes of temperature so you can plant all year round. In addition, she says “plants grow here that are considered indoor plants elsewhere, for example some people have beds of maiden hair fern in their gardens”.

Jan’s gardening life started following a visit from her mother who began watering a very thirsty carnation seedling, which after she left Jan then felt compelled to keep alive! As her knowledge of what to do in the garden grew, she found that “the more you learn, the more you want to do” and she eagerly joined the Garden Club as soon as she discovered its existence in 1990. A Life Member since 2011 she says she “would do anything for the Club, it’s so important”. With a membership of about forty, members take it in turn to host meetings where they talk about the features and conditions in their garden. The trading table is always popular with plenty of donated plants, cuttings and produce and the meeting finishes with afternoon tea.

For the past fifteen years the Club’s valued tea lady has been Ria Howell, a job that Ria says she ”does with pleasure as my contribution to the club as a long term member”. Ria’s in-land hillside property lies on the other side of the Island to Jan’s and these days it receives shelter from the wind via a large number of mature native trees. That wind break however, did not exist at all when Ria moved into the house 44 years ago (some years after first purchasing and living elsewhere on the property). The house had been tenanted out to some young ‘bank boys’ who had set up a golf course in the acre surrounding the house, and further back Guava trees had run wild creating an impenetrable barrier across many acres.

Four acres of that impenetrable area are now totally unrecognisable as a fully restored forest of Norfolk Island native trees and plants. Typically understating the daily labour she carried out over a number of years to remove the Guavas as “quite a big job”, Ria gradually cleared and re-planted. The reward of that labour is now felt by her each day especially when she hears endemic and endangered Norfolk Island Green Parrots and other native birds calling through the trees.

As Ria gradually replaced the grass (and a lot of golf balls!) with a garden to surround the house, she laid pathways that today weave in and out of various delightful spaces. The garden evolved as trees grew and offered shaded and protected places and she was able to turn the leaves into much needed mulch to support further growth. To the front of the house an orchard contains mandarin, grapefruit and oranges. Some of the trees are now very old and as the fruit is “really very beautiful” Ria always allows cuttings to be taken, believing it “should be shared”. Of gardening and being in her garden Ria says : “When I sit out here with my early morning coffee, the dappled sunlight shines through the bush, white terns swooping just metres off the ground, the emerald pigeons and fantails come in; there’s the sound of the wind in the trees and you don’t have to go and meditate. The garden does it for you”. Ria says that as she works in the garden, she finds herself accompanied by more than the plants themselves as they individually bring memories of loved friends and fellow gardeners who traded or gifted cuttings that she grew into plants: “people keep living on in my garden”.

Joining the Garden Club in the late 1990’s and becoming a Life Member in 2016, Ria will be sharing the beautiful fruits of her gardening-labour-of-love during The Garden Clubs of Australia Biennial Convention which starts this weekend on Norfolk Island, when delegates will visit nine gardens including Ria’s garden.

As a small Club located on an isolated island, the Norfolk Island Garden Club perhaps bravely put themselves forward to host the Convention. Confident that they had much to offer visiting Clubs they recognised the value the Convention would bring in promoting Norfolk Island as both an excellent garden and holiday destination. They based some of that confidence on feedback from visiting gardeners, particularly Noelene Hughes from the Nambour Garden Club, who really encouraged them to apply.  The Norfolk Island Club had always and continues to welcome holidaying Clubs and garden groups with an open invitation to their meetings and gardens.

From a hopeful idea, Jan, Ria and fellow club members now expect to welcome a massive 280 gardeners and partners to the Island this weekend, travelling from over 70 Garden Clubs all around Australia.  A program has been created for the week involving a welcome function with entertainment, formal convention functions with local guest speakers at Paradise Hotel, visits to 9 local gardens, a day at Norfolk’s Royal Agriculture and Horticultural Show and a Farewell Fish Fry. In their spare time, visiting gardeners have booked in for all kinds of tours and activities around the island.  Watch our social media platforms for regular updates and photos of the convention – ‘Gardening Norfolk Island Style: Convicts, Community and Coral’.

The Norfolk Island Travel Centre has been proud to partner with the Norfolk Island Garden Club to bring members to the Convention and support management of the event, and also to bring visiting gardening groups to the Island at other times.

Situated on New Cascade Road, overlooking Cascade Valley out to the Pacific Ocean, this accommodation is set in beautifully kept gardens in a tranquil location. Cascade Gardens are a 10–15-minute short walk to town, where you can find restaurants, clubs and a lively local shopping centre.

Ideally located high in the centre of the island, these self-contained cottages have broad panoramic views.  The complex also boasts a tennis court and barbecue area and transit lounge for guests use.

From $1799 pp twin share
The largest hotel on Norfolk Island

Located in the prestigious Buck’s Point area, this Presidential, 5-bedroom, 3.5 bathroom hillside ocean view spa villa is for your Exclusive Indulgence – no other guests or neighbours.

Discover Rainbow’s End, a 3 bedroom house located on 4 acres of land with breathtaking views of the natural bushland and ocean.

Have your morning coffee on your private timber balcony overlooking stunning Ball Bay. This secluded modern holiday home is the perfect spot for your group’s relaxing holiday on Norfolk Island

Norfolk Island is your “over-the-seas” domestic holiday destination.  Stay 7 nights and get 2 nights free in Aloha Apartments Norfolk Island. Relax and unwind in a fully self contained apartment that offers all the comforts and conveniences of home.